What’s the Next Pet Rock in Sales (a.k.a. New Business)? 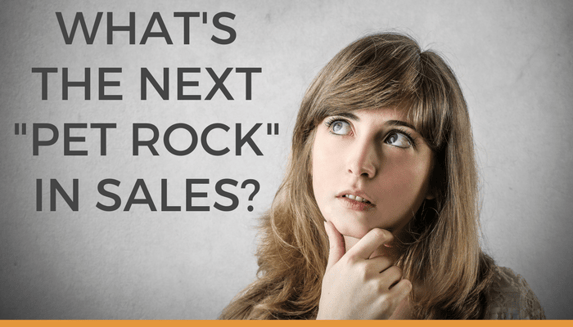 I had a great conversation the other day with one of my colleagues, speculating about what will be the next big thing in sales. The next shiny rock everyone “oohs” and “ahs” over, claiming it’s a game-changer and makes everything before it obsolete.

Here’s the thing: real salespeople know that whatever the inevitable “next big thing” is for sales, it will likely be long on fluff and short on substance. People who don’t like to sell, aren’t in sales, or aren’t good at closing love the idea of getting their rewards without having to do the dirty work of actually selling. And why wouldn’t they? Deals that close themselves?! Prospects that just show up and throw money at you? What’s not to love? It sounds just like streets paved with gold. And is about as accurate.

Do You Recognize Any of These “Pet Rocks”?


Salespeople who actually sell understand that no matter how useful, innovative, or great “the next big thing” is, it will still require someone with the ability to finesse the personal interactions, identify and solve problems, instill trust, and see relationships through to closed deals that make sense for both parties. No matter what channel, platform, or planet, no matter how great your website and content offers, your deals will not close themselves. There may be exceptions in retail and smaller “buy now” SAAS products, but when it comes to professional services and large deals with a long sales cycle (such as agency new business), there is no getting away from the importance of good old-fashioned selling ability.

Some of these trendy new pet rocks are not just misrepresented as blanket sales solutions but can be outright dangerous to your bottom line. Why? They distract salespeople and direct sales resources into activities that are not directly tied to revenue. Selling and closing are most directly tied to revenue. The new pet rocks promise to relieve people of the burden of actually selling. But if there is no selling, how will they deliver?

Doug Davidoff talks about how Inbound Selling and Sales 2.0 have hurt sales. Mike Weinberg has spoken out about the dangers of over-investing in social selling. Most people I know (unless they are directly profiting from a “pet rock” sales fad) tend to agree: the meat on the plate is and will continue to be traditional selling ability. If you cut out the meat, you are going to go hungry.

Some of These Pet Rocks Are Nothing But Fool’s Gold

Here’s a look at some well-known “pet rock” sales trends:

In a post written by Nigel Edelshain, who claims to have coined the term in 2006, Sales  2.0 is defined as being “about salespeople using Web 2.0 tools and social media to sell more effectively.” According to Nigel, Sales 2.0 was born from an acknowledgment that “interruption-based” selling, like cold calling in volume, had become less effective. He goes on to say (roughly) that Sales 2.0 is an ideal counterpart for inbound marketing, both of which were created out of the rise of the Internet and the accompanying changes in buyer behavior.

Sales 2.0 appealed to people because it came at a time of major change. That’s true. The channels in which people wanted to have conversations and make connections were changing. The power shifted to the buyer-side once buyers were able to take ownership of information-gathering and decision-making, independent of a salesperson. But once they did want to further the conversation, the salesperson still had to be competent at selling. As I think Nigel would agree.

“The Inbound Sales Methodology covers every step of the buyer’s journey traveled on the road from stranger to customer, and each corresponding salesperson action. The new methodology acknowledges that Inbound Sales doesn’t just happen -- you do it. And, you do it using tools that help you personalize the sales process to appeal to precisely the right leads, in the right places, at just the right time in their buying journey.”

I’m not sure at what point this definition shifted, but Doug Davidoff at Imagine LLC provides what appears to be an earlier iteration (also generally supported by an older, undated video on SellInbound.com featuring Hubspot’s Director of Sales, Mike Pici):

“Inbound sales is the process of focusing on individual buyers and their personal needs, points of pain, frustrations and goals. As an inbound sales person, it is essential that you prioritize the buyer's needs before your own.”

Note the differences in these two definitions. The newer definition acknowledges that real selling must still take place, it doesn’t happen automatically, and that the inbound component plays a supporting role, as a set of tools. The folks over at Hubspot are serious about selling, so it’s not surprising they eventually had to update their definition. In his December 2015 post, Sorry Virginia, There Is No Inbound Selling, Davidoff points out that the earlier definition of inbound selling offered nothing new to the long-standing “definition of good (or effective) selling at any time since at least the 1970s.” He’s right.

Hubspot’s definition of social selling is:

“Social selling is when salespeople use social media to interact directly with their prospects. Salespeople will provide value by answering prospect questions and offering thoughtful content until the prospect is ready to buy. Thus, the use of social media in sales allows salespeople to delight their prospects rather than interrupt their daily lives with cold calls and hard sells, eventually converting them into loyal customers.”

It’s from mid-2014 (which is about a decade ago in web years), so I’ll cut them some slack for the overly-optimistic picture they’ve painted here. Let’s break it down: social media is the venue — the channel— where communication and good, consultative selling occurs. A relationship is built. But the only thing unique here is the channel!

It’s just incorrect to think that prospects are more delighted to be contacted by someone they don’t know about something they don’t care about if it's via LinkedIn instead of their email or phone. Social media is not going to magically convert someone into a loyal customer. Most of what happens on social is because those who successfully break through to create meaningful connections there have the skills to do so outside of social media as well. Social, while not irrelevant, has been hyped up because it was new. It was never going to replace traditional prospecting and selling.

Here’s what Mike Weinberg, founder of The New Sales Coach, had to say about the problems with social selling:

“The social selling balloon is leaking air fast — let’s just stick a needle in it and pop it. People are saying that everything that used to work doesn’t, that social selling is the answer, and that if you master it you will be the king of selling forever. This is exactly what the reactive, passive salesperson who is either scared to hunt or doesn’t want to hunt wants to hear. Telling them that they don’t need to proactively target, prospect, and pursue potential customers who haven’t already raised their hand is dangerous.”

The definition of sales enablement is in flux, but refers to a combination of factors, which generally include:


When I look at this list, honestly, I think, great! This is almost a dream sales program. It combines a bunch of really sensible, valuable components that are supported by data to improve sales teams. My only comment is that there isn’t a whole lot new here, it’s just that everything is bundled into a big package, and stamped with the label of “sales enablement.”

If this is what it takes to get agencies inspired to invest in their sales programs, that’s wonderful. But is it substantially different from plain old putting resources into a well thought-out sales program? Ehh…. I think many sales consultants, past and present, would construct a very similar “wish list” of components to create an effective sales unit.

This isn’t meant to be a comprehensive list; for example, two of the “big new things” for 2017 appear to be account-based selling and artificial intelligence (AI). Neither of which is going to go far without a solid sales foundation and capable salespeople. In fact, this post on anticipated B2B sales trends for 2017 includes a quote from Mark Elliott, co-owner of Venture Accelerator Partners, which reads, in part, “Account-based selling will continue to increase in popularity. Everything old is new again, when I started in sales we just called this enterprise sales….” People who’ve been around understand the same basic product is being constantly repackaged and re-spun: it's all powered by plain old sales.

I want to be clear; I’m not saying these sales trends have no value. What I’m saying is that they are either about changing the context or they boil down to more tools to put in your sales toolkit. But they are no replacement for the meatiest, most important part of sales—the ability to actually sell. Many effective selling methods are timeless. That’s why people still get value from the wisdom of selling masters like Zig Ziglar and David Ogilvy—much of it is still relevant.

Pipedrive recently did a post featuring eight sales experts weighing in on what will matter for sales in 2017. While their experts did hope to see more social selling, sales enablement, artificial intelligence, and SMS text messages in 2017, there was also a consensus among them that more and more sales organizations are returning to the building blocks of sales. In discussing the role that new technologies may play in the coming year, there were clear qualifications that these tools would play supporting roles rather than replace traditional sales strategy and good relationships between prospects and the salespeople that will see things through to close.

What does this mean for your agency?

Basically, this means you should be wary about getting overly-excited about “the next big thing.” If you are going to explore new sales tools, great, but don’t make the mistake of letting them be a substitute for shoring up your sales process and new business team’s ability to sell effectively on any channel, in any context. As tempting as a new pet rock may look, nothing can replace a solid sales foundation.

Need help with your agency sales? We can help.