Aside from Russia’s invasion of Ukraine, one news item dominated the conversation in Adland this week. It was Martin Agency CEO Kristen Cavallo’s unmissable response to Coinbase CEO Brian Armstrong, who had spun a twelve-part Twitter tale around the idea that “No ad agency would have done” their SuperBowl ad. The exchange set fire to Twitter before Cavallo took the conversation to LinkedIn, where it also went viral before spawning a flurry of articles in the trades. Currently, Cavallo’s LinkedIn post has 14,365 reactions and 806 comments. 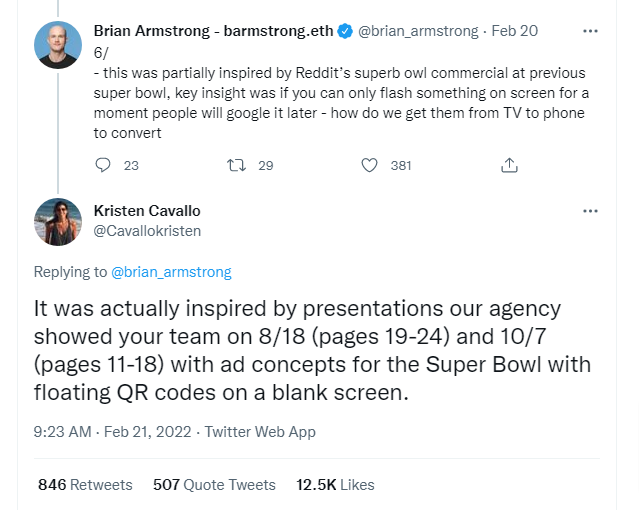 Why has this conversation provoked so many reactions?

The discussion touches on multiple hot-button issues for agencies, including IP theft, fair compensation, spec creative, the pitch process, being devalued and disrespected, and, perhaps most of all, feeling like they can’t stand up for themselves. Underneath it all is a common thread that agencies are tired of the lack of respect they often experience, which is enabled by the disproportionate balance of power in agency-client relationships.

It took one of the strongest agency leaders in the country (The Martin Agency just celebrated its second consecutive year as Adweek’s U.S. Agency of the Year) to stand up for agencies everywhere. Cavallo’s response was both eloquent and exceptional because many in the industry don’t feel they can speak up as she did.

The advertising industry received Cavallo's response with an overwhelming sense of gratitude and appreciation. In comment after comment, people remarked on Cavallo’s bravery in “standing up for us,” inspiring and rallying the community, demonstrating leadership, turning a negative situation into a positive, and advocating for the respect and value that agencies deserve.

Key takeaways from the conversations generated by Cavallo’s push-back

Is mistreatment of agencies the norm or the exception?

In the comment thread, a clear picture emerges that clients abusing agencies is, as John McCarthy writes for The Drum, “the norm, not the outlier.” Whether through IP theft, demands for uncompensated ideas, failing to give agencies due credit or respect (or all of the above), treating agencies poorly is commonplace. Many commenters referenced the frequency with which such behavior occurs, stating it’s happened “to every one of us,” and “to every agency.”

A smaller number of voices claim that while abusive practices may have happened at one point or another to “all of us,” it’s actually a fairly rare occurrence. For example, Sunday Dinner founder Lindsey Slaby (commenting on a story of a mutually-respectful client-agency relationship shared by Jae Goodman, CEO at Observatory) believes we tend to share bad news more often. So while good stories far outweigh the bad, Slaby argues, the fact that they are shared less often skews peoples’ perception of the norm. 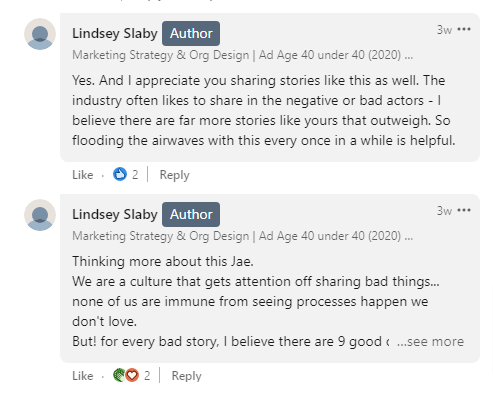 So which is it—rare or common? Both takes are likely accurate. There’s room for nine good stories to every bad one (as Slaby suggests), and indeed, no one is claiming that all brands are bad actors. But considering the frequency of agency pitches and the number of new client relationships pursued, the implication is that prospective clients are mistreating agencies regularly and often. And we shouldn’t consider that acceptable.

I was struck by the conversations around IP theft by brands and other agencies during a pitch. Ironically, in this case, Kristen Cavallo is not claiming IP theft or credit for her agency. In the comment thread, people spoke of various situations that “felt like stealing” — even if it didn’t technically count as stealing, or if perhaps no theft had occurred (such as when multiple agencies organically have similar ideas).

Often, while people didn’t know for sure their idea was taken, lingering doubt left them feeling like they’d been done wrong. Such suspicion worsens the sting of losing a pitch, adding insult to injury and creating a bitterness that further taxes an agency’s team. Agency leaders shouldn’t come away from pitches with this uncertainty.

Suspicions of IP theft could be minimized by improving transparency and communication between brands and the agencies who pitch them. When there is an overlap of ideas between pitched concepts, unnecessary stress and ill will can be avoided by addressing it head-on. That way, agency teams don’t have to feel unnecessarily wronged when they see a concept come to market that looks suspiciously like their work. They deserve the courtesy of not having to wonder about it. And it would reduce unfounded accusations of theft.

For years, agencies have contorted themselves to appease increasing demands from brands to deliver “more for less.” The reward for their efforts has been more of the same, while being treated with less value and respect than they’ve earned.

Particularly now, when agencies are understaffed, overworked, overpitching, and working for free to land smaller pieces of business with thin margins, they feel stepped on. Many have been pushed too far and find themselves in unsustainable or barely sustainable client engagements.

At the same time, most agencies can't afford to lose business or risk damaging their reputation, so they feel powerless to speak up for themselves. For example, Starch Creative’s CEO Brandon Ball recently spoke up about alleged IP theft by a client and was promptly sued for defamation.

Perhaps more than anything else, over 28,000 interactions and hundreds of comments on social media this week demonstrate that something needs to change. Agencies work too hard and give too much to be treated with anything but respect.

"With so many agencies putting in extra hours, creating additional concepts, lowering their margins and more, it is not outrageous to expect integrity and honesty to shine through in agency reviews and decision-making processes." — Jordan Mayer, vice president of client engagement, The Duval Partnership

“Pass it on.” The culture of theft is contagious.

Some people mentioned being hired for their ideas before the pitch, and then being fired after the pitch, with no recourse to claim IP theft. Small agencies and production companies have also reported being used in this manner.

How did this behavior become so normalized? Agencies can’t claim the moral high ground when it comes to IP theft by brands when they are also doing it to each other. If agencies expect to be treated better by brands, they should also check that their own houses are in order and find out whether their cultures encourage or discourage IP theft.

What can your agency DO?

The immediate question raised by many in this week’s conversations (on and offline) was some variation on “how do we translate this momentum into meaningful change?” Here are some potential solutions that were shared: 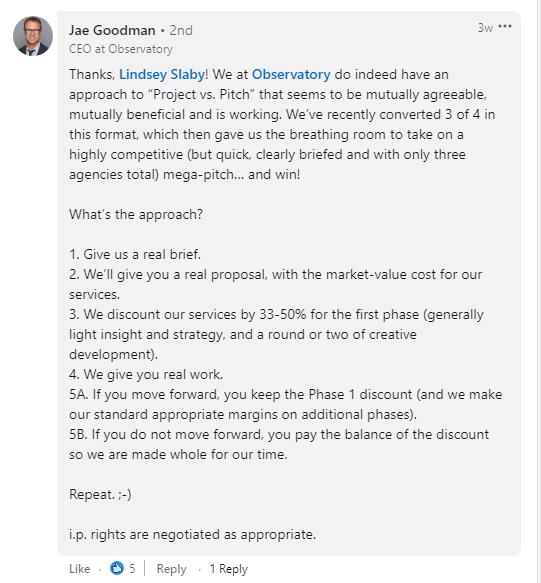 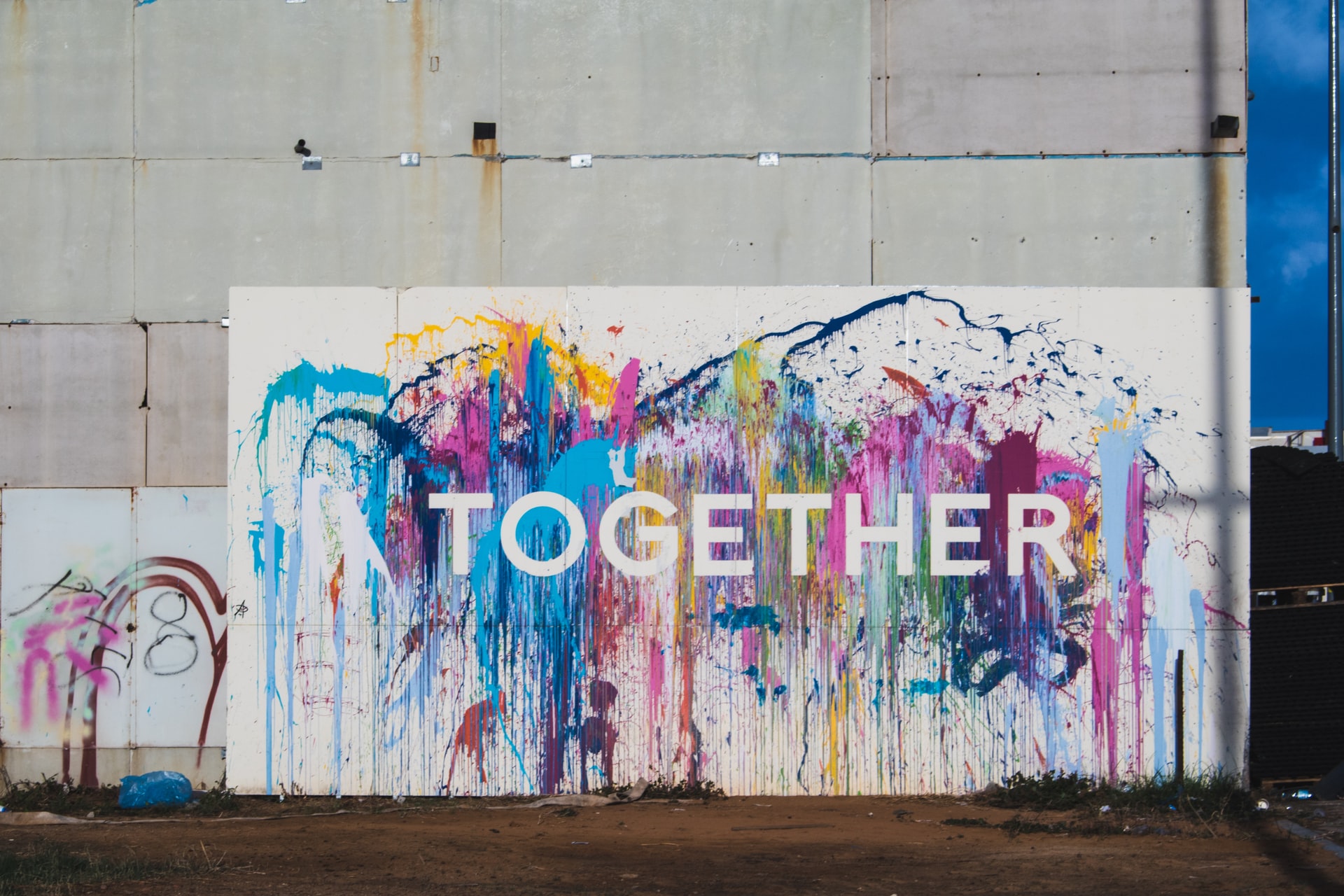 It’s time for agencies to push back harder on brands that mistreat them. But it’s not just about standing up for agencies; brands also need to be educated about what’s appropriate and how their actions affect agencies.

For example, marketers surveyed by New Business Methodology founder Julia Vargiu for The OUCH! Factor Report™ were unaware of the whole costs of pitching and how long agencies had to work after securing their business before they generated any profit from the relationship. On average, PR & Communications agencies face a recovery time of 2.7 years in a relationship before it is profitable for them — and the average agency-client relationship only lasts 2-4 years. From a financial perspective, the current pitch process is unsustainable. When marketers learned the scale of the problem, they were floored.

Of course, the real costs go far beyond the bottom line. Those who really pay the cost of pitching are agency staff. In the past 18 months or so, the industry has drawn a lot of attention to the impact of pitching on employee well-being and mental health. It’s only gotten worse as agencies are understaffed amid hiring and retention challenges, and agencies take on more pitches in desperate attempts to secure their bottom line. These conditions are also unsustainable, and agencies need to be vocal about them.

Campaign editor Maisie McCabe recently compared the current pitch review process to buying a cheap shirt for $1.36. You know the price is unreasonably lower than what it should be, and if you purchase it, you do so knowing that someone else paid the costs for your savings. Buying a cheap shirt therefore makes you complicit in the sweatshop labor conditions that make powerless people miserable.

By demanding unpaid labor from agency staff on pitches (for which salaried employees aren’t compensated), brands and agency leaders are similarly passing their expenses onto less powerful people who are ill-equipped to shoulder them. Those costs are real in both financial and health terms; brands know it, and they share responsibility for it. Passing costs on to those with less power is consistent with a culture that enables more powerful players to steal from those less powerful, too.

Recently, IPA president Julian Douglas framed the unnecessary pitches and work taking place as “wastage we should look to reduce.” His choice of words suggests there is room to revisit the current pitch process through the lens of ESG values. There is tremendous pressure on corporations and the C-suite right now to meet ESG goals, and many of those goals are likely inconsistent with wastage (for brands and agencies) around the pitch process. Additionally, contributing to the financial and mental health detriment of agencies and their employees is inconsistent with many corporate ESG values. Agency leaders should hone their ability to talk about helping clients meet ESG goals, including how an improved pitch process fits into that picture.

It’s critical that those who have the power and ability to stand up for agencies continue to do so. The Martin Agency’s Cavallo was uniquely positioned to do that last week. Sadly, the majority of agencies can’t afford to bite a hand that might feed them. For those agencies, strength will come by creating a united front and with the help of advocates who can speak for them without immediate threat to their own livelihoods.

If you were inspired by this week’s conversation, how will you use it to better your agency and your industry?