Agency Lessons From the Rise of In-House Agencies & Consultancies

What can agencies learn from looking back at how in-house agencies and consultancies were perceived six years ago when they first started to dominate media headlines? A lot, actually.

Back then, there was widespread fear and denial around the threat posed to agencies by consultancies and in-house agencies. People would often say things like: “Sure, in-house agencies might be able to do abc, but they don’t have creative talent with the depth of background and expertise to do xyz effectively, and they’ll always have to count on ‘real’ agencies for that.” As if to reassure themselves, or will it into reality.

Of course, since then, year after year, in-house agencies have grown in every respect. As each subsequent report has been published with proof of in-house agencies’ success (see Gartner, IHAF, and Forrester), statements of denial can still be heard from agency leaders. Each time, it’s slightly quieter and scaled back to accommodate further concessions, like “okay, well, the in-house agencies might be able to do this, but they still can’t do that.” 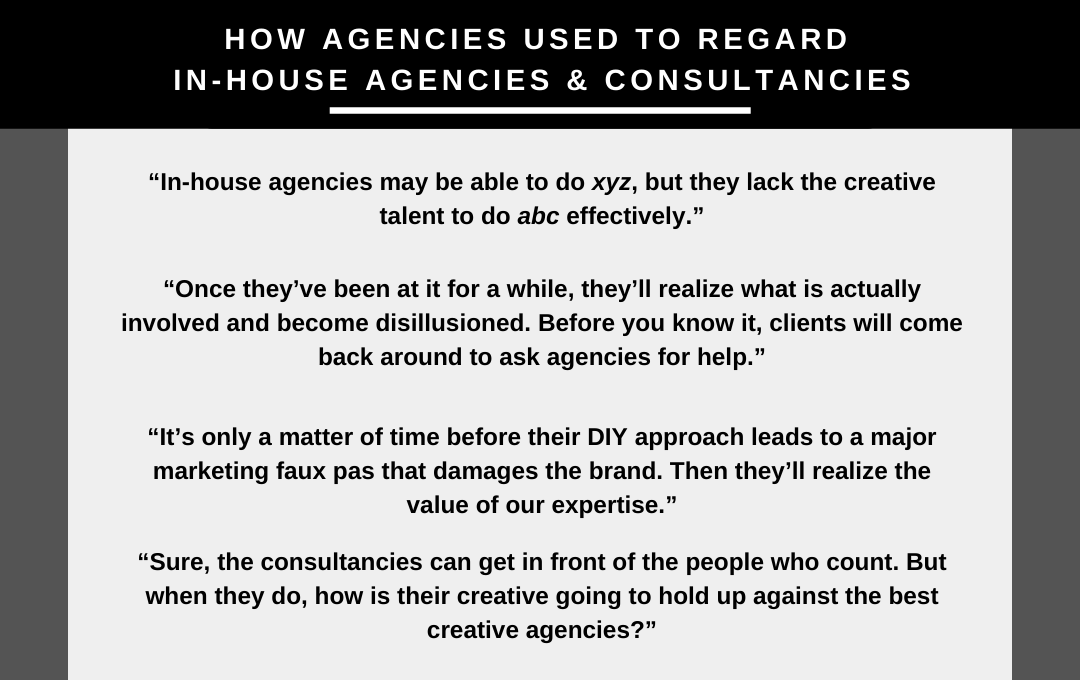 This all serves to document just how out of touch some agency leaders have been with the new reality. And what purpose did their denials serve? Agency leaders couldn’t stop the growth of in-house agencies, and those who failed to take it seriously are also less prepared to be competitive in today’s market.

Last year, Wongdoody chief executive Ben Wiener declared the agency versus in-house argument “over,” saying “the stark either/or proposition is not suited to the needs of today’s companies…” Of course, he’s right. And looking back, it seems weird that in-house vs. agency (and agency vs. consultancy) were ever positioned or thought of as all-or-nothing dichotomies. Looking at the world in such absolutist either/or terms doesn’t seem creative at all.

To my knowledge, in-house agencies never came in as a unified front, claiming that they would soon be replacing agencies and taking over the world as we know it. Some of the consultancies (like Accenture) did make such bold statements and, as Digiday memorably covered, failed in that regard and instead saw themselves “bested by the agencies they set out to usurp.”

While consultancies’ failure to deliver on their lofty promises (yet) is just the kind of “feel-good” story many agency leaders will latch on to, it's not the whole story. Accenture may have been naïve and premature in its proclamation that it would unseat agencies. Still, consultancies’ involvement with advertising has led to changes that can benefit all organizations serving Adland.

Consultancies have opened a door for creative work to be de-commoditized (as Jay Pattisall, principal analyst at Forrester, observed in Marketing Dive). When the C-suite recognizes creativity's value, both consultancies and agencies can gain from it. 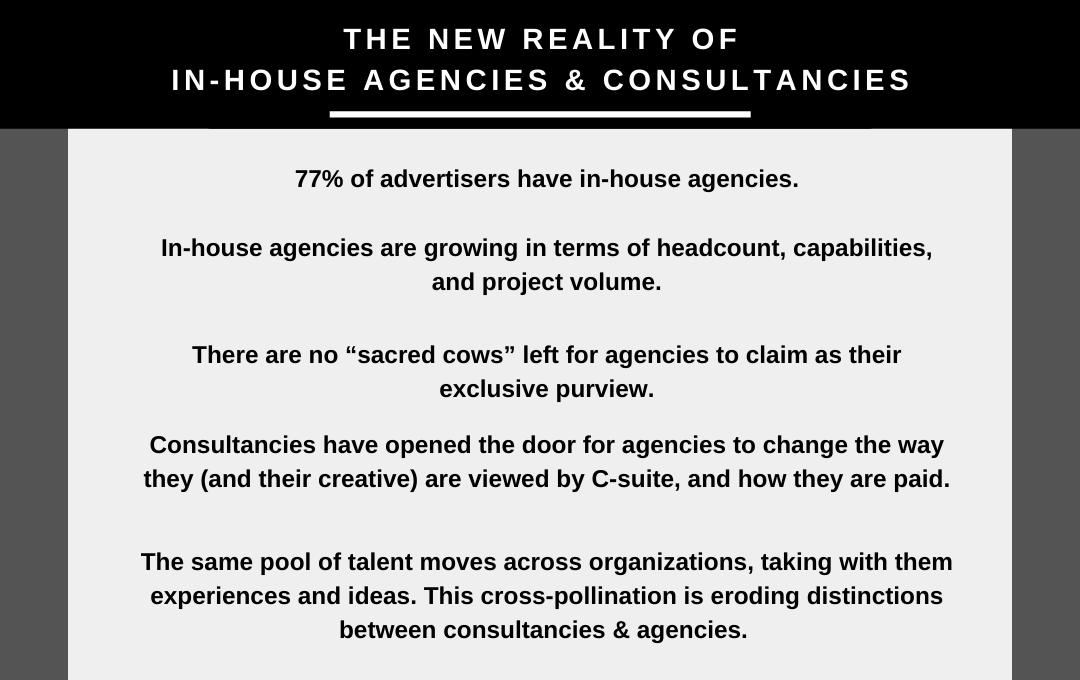 The reality is that there is so much cross-pollination now between agencies, consultancies, and in-house agencies that criticisms of weaknesses inherent in any of those models — especially around talent and creativity — are slowly becoming less relevant. Amid “The Great Resignation,” agencies cannot so easily claim the upper hand on account of their creative talent. 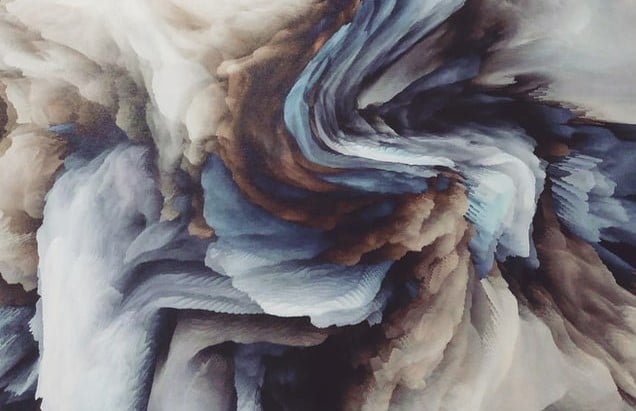 The best aspects of every organization are spreading, whether through M&A or by hiring from the same pool of talent. As people move from one organization to another, they take experiences and ideas that can shape the culture, capabilities, processes, and reputation of wherever they land. That's a good thing.

“There are a growing number of people moving between the management-consultancy-owned agencies and other parts of our industry... More people are exposed to new ways of working and are taking those behaviours with them, making our industry as a whole more robust and resilient.” — Jim Houghton, partner at corporate advisory firm Waypoint Partners, in Campaign

There should be a constant evolution of ideas and processes. Creative agencies (and all good businesses) should be open to better, more efficient, more in-demand, and more profitable ways of doing things.

But whether new ideas are perceived as threats or opportunities goes back to organizational culture. Is your agency open to new ideas, or are its leaders rigidly hanging on to the way they’ve been doing things? Because the latter seems ill-fit for a creative agency in an evolving landscape.

It is concerning to look back at the way many agencies reacted to in-house agencies and consultancies — dismissing them with a series of denials and failing (in many cases) to reframe challenges as opportunities. Everything around us is moving forward. More change is coming fast. It is hard to imagine how a creative agency could fail to embrace change and still be successful.

It’s worth asking: What is your agency’s process for elevating and implementing good ideas? How do you seek out new ways of seeing and doing things?

“When [the consultancies] hear a good idea, no matter where it comes from, they aren’t afraid to adopt those new ways of working and build scaled processes across their global networks. They don’t see it as a threat; quite the opposite…the good stuff gets promoted and actively put to work in a much more purposeful and deliberate way than in adland, where things tend to be a bit more ad hoc and, dare I say, chaotic.” — Jim Houghton of Waypoint Partners, in Campaign

For the agency leaders and creatives who have contributed quotes or written op-eds over the years explaining why in-house agencies are sub-par, and consultancies will never succeed, maybe you’ve been looking at it the wrong way. Maybe we all have. Instead of taking a defensive position and doubling down on your turf and your ways, what if you took a more open approach to reflect on questions like: 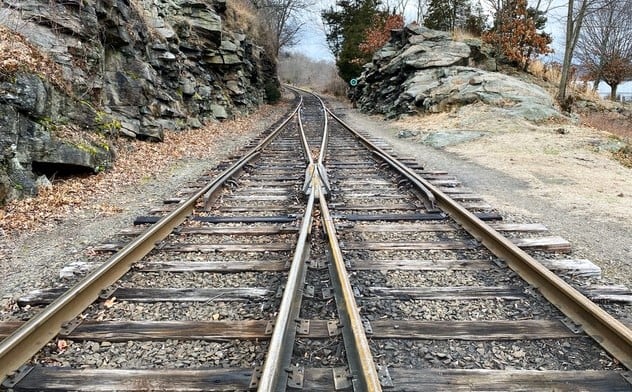 Given the great diversity amongst the different entities that fall under the umbrella of “advertising agencies” and the ongoing meshing of organizations, people, approaches, and service areas, is the distinction between consultancies and agencies still meaningful today? Does it matter if you are working with an in-house agency or a marketing department, as long as what your agency offers is still in demand?

There’s no shortage of competition, but is it really about an agency’s label or category more so than whatever unique elements might make them a “threat” to your business?

I’d like to see more agencies studying prospects and competitors in general instead of worrying about whether consultancies and in-house agencies specifically are going to steal their lunch. Channel those concerns into proaction.

A full six years have passed since the media began documenting the ascent of in-house agencies and consultancies. Some agency leaders have started new entities or reworked their entire business models in that time, and good on them for doing so.

For those that didn’t do as much in response to these shifts, I wonder what might have been done differently had the collective “we” taken a less defensive, less denialist approach to in-house agencies and consultancies. Let’s do better next time.